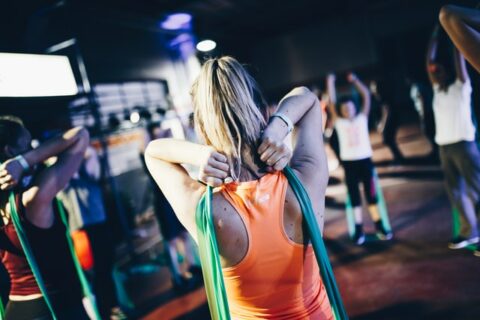 Hey all, I’m back after a two-ish (three-ish?) week hiatus!  I was busy traveling, eating crappy food, and NOT working out.  Aaanyway… today’s post will go over a great resistance band workout for shoulders.  I’ve said it before, and I’ll say it again: the shoulders don’t get enough attention among fitness enthusiasts.  So check out this post to understand how to get strong shoulders without weights – just resistance bands.  Also, don’t mind the weighted vest I’m wearing in the gifs – I did these demonstrations while I was also doing a completely unrelated workout.  🙂

One thing I want to emphasize with all of these moves is that slow, controlled reps are key.  Don’t rush through these workouts, or else they won’t be as effective.

Get the blood flowing through your shoulders with two exercises that feel great.  Do not ignore these:  improving your shoulder flexibility and just plain warming them up is critical to help avoid injury.

You may already know that I love this move.  Just hold the band taut in front of you and lift over your head, back behind your body as far as you can go.  The more often you do this move, the more you will be able to reach back.

I can’t take credit for this, and I may not do it as well as he does, but it is extremely effective.  I don’t think I’d do it as long as he does in the video, FYI – he’s just demonstrating.  Depending on where you are, you may need a door anchor for this move.

Grip the handles and stand on the band so the resistance is enough for you to pull, but not too hard that you can’t lift your arms all the way up.  You will want to experiment a bit to determine the right foot width.  Keep your arms straight and lift up, focusing on your shoulders, until your hands are over your head.

Get into a plank position and use one foot to hold the center of the band, keeping your leg extended.  Grip both ends of the band with the hand on the same side (right foot/right hand).  Punch straight forward in the air, and slowly bring your hand back towards you.  Repeat for the other side.

10 Reps per side, or until failure

Stand on the center of the band, grip either end of it, and slowly push up towards the sky.  Then, control the band on the way back down.

10 Reps or Until Failure

Stand on the band with your feet at a width that gives more resistance than the shoulder press.  You are leaning forward with this exercise, so there will be less space to cover.  Grip either end, lean forward, and pull your arms back, bending your elbows as you do so, and focusing on your shoulders.

This time, stand with your feet at yet an even greater width apart.  Even less motion here.  This is a great exercise that I like to do part way through my resistance band workout for shoulders because it is a little easier and serves as a bit of a break, while still keeping your heart rate consistent.  When in position, simply shrug your shoulders up as high as you can.

Back to the hard stuff!  Stand on the band with your feet about shoulder-width apart (or closer if this resistance is still too tough).  Slowly lift your arms along the sides of your body as high as you can go, and then slowly lower them back down.  An alternative is to do one arm at a time, but I just prefer to do both at once.

10 reps or until failure

You may need a door anchor for this move, depending on where you are.

Most people like to do these flies for the chest, but if you keep your arms straight you will REALLY hit the shoulders hard.  In the gif, I am doing one arm because I was able to double the resistance by holding both ends in one hand.  If you want, you can do the same move with both arms at the same time, just with less resistance.  Up to you.

Stand far enough away from the anchor to allow enough resistance.  Keep your arm as straight as you can, and bring your hand forward in front of you.  Then, slowly bring your hand back to the starting position.

You may need a door anchor for this move, depending on where you are.

Stand far enough away from the anchor to add more resistance.  Lift your hands above your head, keep your arms straight, and slowly bring your hands down in front of you.  As you can see from my demonstration, the bands eventually land on my shoulders, which takes away some resistance.  If you can anchor the band to a higher position, then you can avoid this issue.  Once you’ve brought your hands all the way down, slowly lift them back up to the starting position.

If you followed this routine as described, your shoulders (and possibly arms) should be burning at this point!  You do NOT have to do this workout in the exact same order every time.  I prefer to change the order around every time I do it, in fact.  And of course, remember to stretch!

While you’re here, you might as well check out my reviews for resistance bands, as well.

Do you have your own resistance band workout for shoulders?  Please let me know in the comments – I am always open to new ideas for my resistance bands, and I would love to hear what moves you’ve found or come up with. 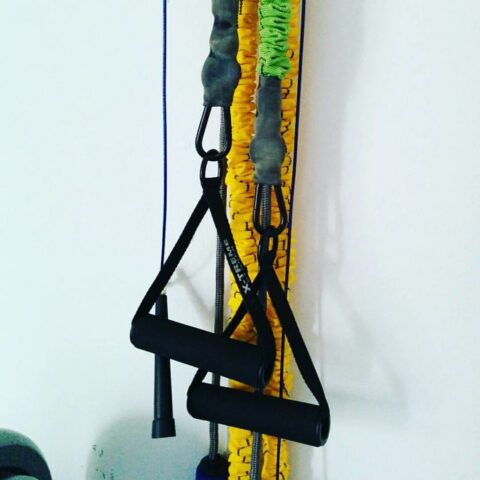 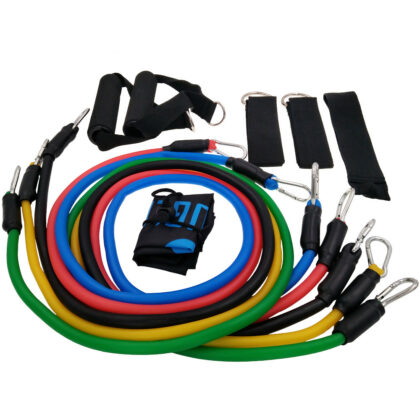 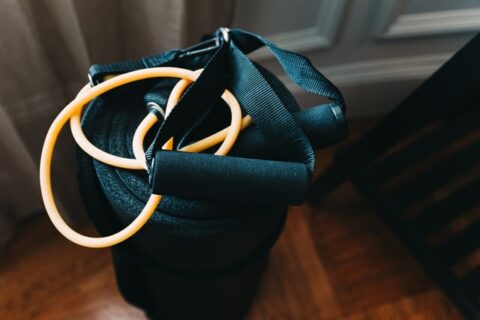